The flood study will assist Council and its community to improve future planning for land-use, emergency response and strategic asset management.

What is the study about?

At Bega Valley Shire Council we know some parts of the Local Government Area (LGA) are more prone to flooding than others and we’re committed to finding solutions to reduce the social and economic damages of flooding. With the financial and technical assistance of the State and Commonwealth Government. Council prepared a flood study for Eden, Twofold Bay and parts of the Towamba River.

The flood study developed flood models to represent flooding resulting from catchment rainfall and ocean storms. The key areas included in the study were:

The computer based flood models were built using digital terrain data to represent the landform of the catchment and creeks as well as bathymetry representing the bed conditions of Twofold Bay and Lake Curalo. Rainfall and ocean conditions from past flood events were used to recreate these events and calibrate the results against historical flood levels observed by the community across the study area.

Why does it flood?

Flooding within the study area can occur for different reasons.

In the upper catchment along the Towamba River and its tributaries, flooding is generally the result of prolonged rainfall causing the rivers and creeks to overtop their banks causing flooding of roads, bridges and private properties.

In the lower lying area of the study area such as Boydtown and the foreshore of Twofold Bay flooding can be caused either by the river flow coming down from the catchment or ocean storms and high tides, often it can be a combination of the two.

In addition, local flooding can be caused by intense short bursts of rainfall. Areas of Eden are known to have experienced flooding where stormwater cannot be contained within the existing pipes and channels.

Why undertake a Flood Study

The preparation of the flood study helps Council to understand existing flooding problems. It also helps to identify where flood management measures may be best implemented to reduce the cost of flooding to the community, assist with emergency management and evacuation processes and guide future development in a way that is compatible with the flood hazard. 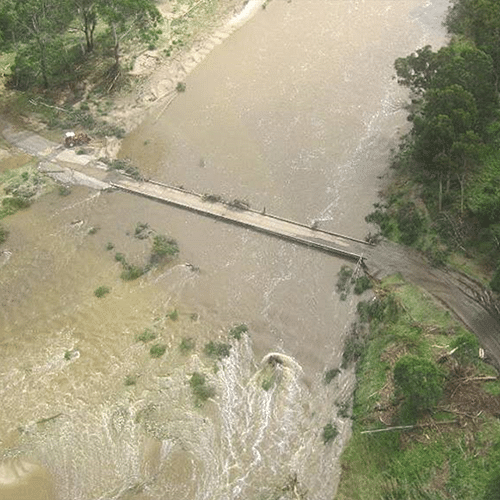