Get bush fire ready this summer

Get bush fire ready this summer 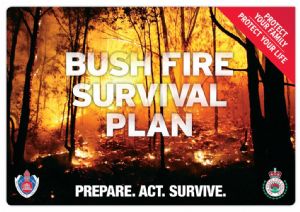 These sessions will give updates to the public about the coming bush fire season and explain the process of making a Bush Fire Survival Plan.

The Bush Fire Survival Plan can be made using the Rural Fire Service mobile and tablet app with paper based plans also available on the day.

The Library will have some iPads with the RFS app pre-installed for attendees to build their plan and print it out to take home. Participants are welcome to bring their own devices.

The Bush Fire Survival Plans will be available at the libraries the week of the information session for those unable to attend.

Community Safety Officer from the Far South Coast Rural Fire Service, Martin Webster, said the aim of the sessions is to break down misconceptions and help people get their plans into a useable format.

“Research has shown that many people are not completing Bush Fire Survival Plans because they find the task intimidating,” he said.

Council’s Programs and Partnerships Officer, Scott Baker, said he is thrilled the libraries can host these important workshops.

“We want to provide the community a means to explore what the library and the RFS has to offer in assisting everyone with creating these vitally important bush fire safety plans,” he said.