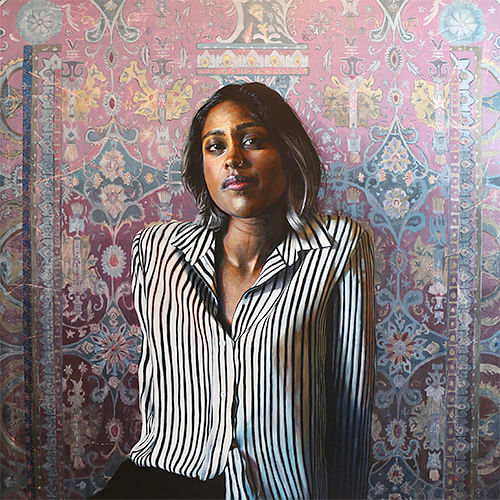 Cameron Richards has beaten out an outstanding collection of 38 finalists to win the 2020 Shirley Hannan National Portrait Award.

Quite incredibly, Richards, who is based in Western Australia, has no formal art education and until now has used painting as a creative outlet that contrasts with his qualifications in physiotherapy.

His acrylic on canvas creation entitled ‘Miss Priya Premkumar’ attracted the acclaim of the National Portrait Gallery Director and guest judge, Karen Quinlan AM, who made the announcement tonight that was streamed due to the ongoing Covid-19 situation.

Ms Quinlan was impressed with the quality of all the finalists but reserved glowing praise for the winner.

"The artist really captured a great portrait, it reflects on two different worlds and the challenge that Priya would have had juggling expectations of her family. I feel like I engaged with her and in a sense could almost talk with her. Everything is working and it’s definitely the winning portrait in the show,” Ms Quinlan said.

Richards, who picks up $50,000 (Australia’s richest prize for realistic portraiture) for his work, said the portrait explores his strong first impression of Priya who he describes as his superior at work and life.

“Three years into our friendship, the creation of this piece has been incredibly positive and admittedly tedious. My understanding of how Priya has come to be has deepened while painting as I have explored the complexities of her life: Australian, Sri Lankan and personal ideations, all intermingled and juxtaposed,” Mr Richards said.

Hannan, a gifted portraitist, and well known in the Bega Valley as a staunch supporter and generous patron of the arts, funded the John Balmain National Award for Portraits and Figure Drawing from 1993 until she re-established it in her own name in 2002 with a substantially increased first prize of $15,000.

A prerequisite for the award was made that those works selected to hang depict their subjects accurately and demonstrate a sound skill and knowledge of drawing and painting technique. The award was established with a specific and unremitting realist bent, which continues to this day.

Before her death in 2005, Hannan doubled the prize purse to $30,000 and it was decided to discard the figure drawing component of the prize, concentrating on portraiture alone.

In 2012, Hannan's son Peter, himself a talented photographer, paid further tribute to his mother's memory with a generous personal donation of an additional $20,000 bringing the prize purse for subsequent awards to $50,000.

Australians have a particular love of portraits, both as audiences and as artists, and we (Bega Valley Regional Gallery) are proud to be the home of one of the country’s most respected awards,” Mr Dawson said.
“The great esteem this award is held remains clear, with 250 entries being received and all Australian states and territories represented.

“Despite the incredibly challenging year, a fascinating field of works appear in this exhibition, with the strong trend in entries during the Covid-19 lockdown being toward artist’s self-portraits and portraits of their close family, many of which are represented here.

“There are wonderful representations of distinguished Australians, alongside local heroes and quiet studies, that allow us to visit personal relationships and private lives.

“Huge thanks go to our guest judge, Karen Quinlan. Karen’s choice of winner in 2020 is an important recognition of ability and skill and we are excited to follow Cameron on his career journey,” Mr Dawson said.

The Shirley Hannan National Portrait Award will be on display at the Bega Valley Regional Gallery from Monday (27 July) through until 11 September.