'Pop' Lucas to be remembered

'Pop' Lucas to be remembered 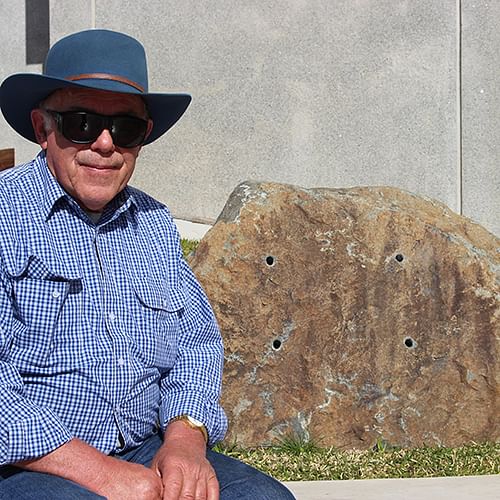 The Bega Valley is about to recognise the contribution of one local father to World War 2.

A tribute plaque will be dedicated in Bega on Friday, 1 September at 11am telling the story of Henry ‘Pop’ Lucas and his nine sons that went to war.

The grandson of Henry Lucas, Guy said most families of the time had sons serving, he hopes this  new space will prompt opportunities to share that history.

“To farewell nine sons is something extraordinary, perhaps even a world record,” Mr Lucas said.

All nine boys are recognised on the Bega War Memorial – Henry Jnr, Lance, Bill, Rufus, Ronald, Dudley, Cecil, Joseph, and Basil, alongside comrades from around the Bega Valley.

“This plaque in front of the Civic Centre remembers my Pop, who raised all these boys and five other children on his own when my grandmother Alice died after giving birth,” Mr Lucas said.

It is understood that this is the only group of nine brothers who enlisted to serve in the one conflict anywhere in the British Empire, or the British Commonwealth as we know it today.

“And I understand there is a plaque in the White House in Washington noting six brothers – only six brothers!” Mr Lucas laughed.

This story starts when ‘Pop’ Lucas received a standard letter from the King when Dudley was killed on January 15 1942.  That letter read, “We pray that your country’s gratitude for the life so nobly given in its service may bring you a measure of consolation – George.”

“Evidently Pop then said, ‘I’m going to write to the King and Queen,” Mr Lucas said.

“He sent them pictures of all the boys’ which resulted in him ultimately receiving a letter from the King recognising and congratulating the family for what it was doing for the country and for the war effort.”

The original letter was lost in the devastating bushfires of 1952 that swept through the Bega Valley, all that is left is a 1942 newspaper article from The Daily Telegraph detailing the King’s interest in the family.

“It was something special to get a letter from the King in those days, not like today where they churn them out,” Mr Lucas laughed.

“As the eldest son of the eldest brother of those nine Lucas lads who enlisted, along with my cousin Garry, who is the son of the fourth eldest of the sons, Rufus. We are both honoured and delighted to be unveiling this tribute.

“However, it’s truly been a community effort, and we have to thank numerous people for their interest and assistance, including the Bega and Cobargo RSL Sub-branches, Bega Valley Shire Council staff and Mayor, Kristy McBain,” Mr Lucas said.

“And a special thanks must go to local sculptor Tony Dean for designing and overseeing production of the plaque.”

The nine Lucas brothers and their father were just ordinary blokes, doing what many other ordinary Australian families felt was their patriotic duty at the time.

“Most of them were trapping rabbits and stripping wattle bark when they left to join the Australian army,” Mr Lucas said.

A simple dedication service will be held with the Lucas Family and local RSL members on Friday, 1 September at 11am in front of the Bega Valley Commemorative Civic Centre.

Photo 1: Guy Lucas is looking forward to the dedication of a tribute plaque to his grandfather Henry.

'Pop' Lucas to be remembered - longer version from BVSC on Vimeo.