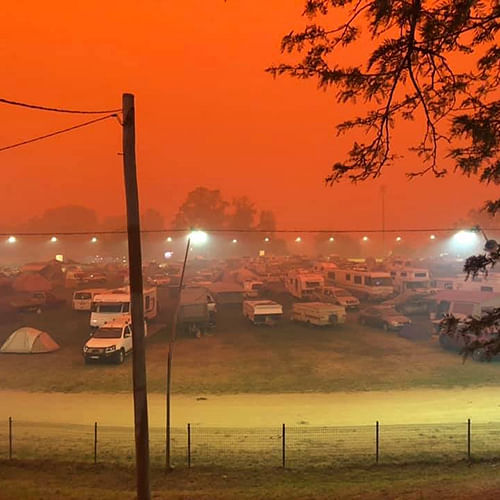 Throughout the first few weeks of January, Merimbula and Bega townships experienced waves of people coming and going, and coming again, as bushfire alert levels fluctuated from Advice, to Watch and Act, to Emergency and back again.

Councillors Russell Fitzpatrick and Liz Seckold both know how hard it is to pack up and leave your home in an emergency.

On Thursday 2 January, Cr Fitzpatrick helped friends from Burragate evacuate to his home. Ironically, the next day he found himself, his family and visitors having to relocate to Merimbula. His mother lives in Millingandi and he helped her move to Merimbula that day as well. Back home, a week later he was taking shelter in Merimbula again!

For Councillor Liz Seckold, the latest bushfires have reminded her of her experiences during the Tathra and District bushfire and having to evacuate to the safety of the Bega Showground in March 2018. This time, however, Cr Seckold found herself at the showground as a volunteer.

“I just went in there to be a gofer – I replenished bathroom supplies, helped people fill out forms and generally assisted where I could.

A long-term resident of the area and former Head Teacher Welfare at Bega High School, Cr Seckold said it helped knowing so many people.

“People come in (to the showground) because they know you, they trust you and they want to talk to you,” she explains.

“We had lots of learnings from the Tathra and District fire but this time the evacuation centre was different. The evacuees didn’t come from one community, they came from many communities and there were tourists too.

“We shared the sheer terror when day turned into night at two o’clock in the afternoon.

“People stayed for a lot longer, for example the Bermagui people stayed on because they had no electricity for quite a while.

“Now, I’m trying to link in with the people I personally know who have lost homes and help with outreach,” says Cr Seckold.

As an employee of Bobbin Transport, Cr Fitzpatrick knows first-hand the extra expense and strain that a compromised roads system places on the freight industry and local businesses.

“The impact of major road closures on work has been massive; with the Princes Highway south blocked, well… the implications are mounting daily.

“Goods have had to go via Canberra at an enormous financial cost to the company, alternative routes are longer, placing added pressure on drivers and creating challenges for managing the workforce.

“The effects on business and employment will hit hard and have already done so in some cases - it is a must that we have all levels of government working on this and that the implications of lost income are dealt with to enable businesses to continue,” Cr Fitzpatrick says.

Through his involvement with the Pambula Show and the Sydney Fine Food events, Cr Fitzpatrick has developed a ready friendship with the CEO of Foodbank Australia, Gerry Anderson. Many will remember that Foodbank Australia provided emergency supplies after the Tathra and District fire in March 2018.

“On New Year’s Day, Gerry saw the devastation at Cobargo and he immediately called me to see how Foodbank could help.

“Thanks to the collaboration between Bobbin Transport, Bendigo Bank and Christine and Peter from the Sapphire Community Pantry, we were able to organise truckloads of supplies for the Cobargo relief centre as well as for the evacuation centres at Bega and Merimbula,” he explains.

Cr Fitzpatrick was also involved in opening the Pambula Sporting Complex as a place where people could leave their boats and caravans, separate from their homes.

Cr Fitzpatrick acknowledges the widespread toll on our communities.

“During testing times, we must look out for each other and be aware of mental health issues and what other people may be going through.

“The impact of these bushfires will apply to almost everyone in the shire for some time,” Cr Fitzpatrick says.

Photo: Bega Showground on 5 January 2020 at 12.30pm - one of the several evacuation centres that operated around the Shire.