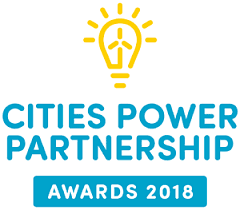 Bega Valley Shire Council is delighted to be involved in a partnership that has taken out top honours for knowledge sharing at the inaugural Cities Power Partner Summit Awards.

The five-council partnership, made up of Bega Valley, Eurobodalla, Shoalhaven, Wingecarribee and Kiama Councils, was recognised for ground-breaking collaboration in developing a strong, regional climate response for South Eastern New South Wales.

The awards, that recognise the work being done in local government to transform Australia’s energy landscape, were announced on Thursday as part of the Climate Council’s Cities Power Partnership National Summit in Kiama.

Bega Valley Shire Council Mayor, Cr Kristy McBain, said that it was exciting and encouraging for the work of our local Councils to be recognised on the national stage.

“As Councils we are dealing with very similar concerns and challenges and sharing our expertise and experiences is one of the most powerful tools we have to reduce our climate impact,” Cr McBain said.

“Our South-East Councils were among the first intake to sign up to the Cities Power Partnership last year, as we were facing similar coastal issues, recognised the efficiencies that could be gained and needed to reduce our electricity costs wherever possible.

“Since the launch we have been able to take advantage of emerging opportunities and potential joint projects such as the South-East Electric Highway proposal.

“We are on our way towards a future based around renewable energy, in line with our Climate Change Strategy,” Cr McBain said.

The Cities Power Partnership is a free national program created by the Climate Council that celebrates and accelerates the pollution reduction and clean energy successes of Australia in towns and cities.