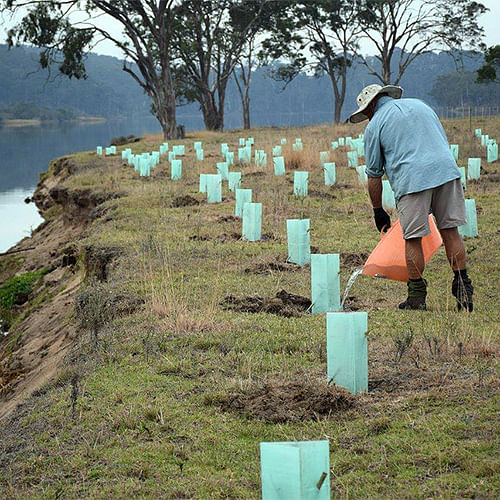 A fencing and revegetation project is set to transform approximately 1km of Council-managed land along the Bega River foreshore at the end of Thompsons Drive in Tathra.

The work is being undertaken through a partnership between Council and South East Local Land Services (LLS), with LLS also providing funding support through the Australian Government’s National Landcare Program.

Bega Valley Shire Council’s Acting Environment and Sustainability Coordinator, Michael Fiedler, said that the works fulfil priority actions from the Bega River Estuary Management Plan, which is guiding the sustainable management of the estuary into the future.

“When completed the work will help stabilise the eroding river bank and degraded wetlands by preventing cattle from accessing the river, subsequently allowing the vegetation to get re-established,” Mr Fiedler said.

“Removing cattle from the river and improving the vegetation has significant benefits to water quality and habitat, with the re-established vegetation acting as an important filter, binding up soil and sediment and preventing further loss to the river, while increasing the quality and variety of habitat on the foreshore.

“Fencing the foreshore will prevent cattle from defecating in the waterway and wetlands, therefore improving water quality, with a subsequent reduction in pollution bringing significant benefits for recreational water users and the aquatic ecosystem.

“Importantly, improving the foreshore and wetland habitat through these measures will further enhance the declared fishing haven at Tathra, which is so important to the thousands of recreational fishers and tourists that visit each year,” Mr Fiedler said.

Photograph: A fencing and revegetation project is set transform the Bega River foreshore at the end of Thompsons Drive in Tathra.