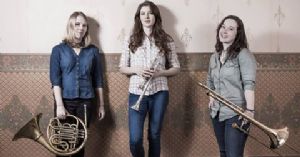 Bega Valley Shire Library together with Four Winds will offer children an inspiring and creative musical storytime at Bermagui, Bega and Eden libraries in October.

The Marvellous Musical Storytime will introduce children aged from two to five years to the big sounds of brass instruments.

“Brass instruments and the sounds they make will fascinate children especially if they haven’t seen or heard them before,” says Programs and Partnerships officer, Scott Baker.

“We hope this will be an inspirational event for young children who will have a rare opportunity to get up close to some very talented musicians and their instruments.”

Shire libraries will be filled with musical notes from the French horn, trumpet and trombone played by three students from the Australian National Academy of Music.

Amanda Tillet started playing the trombone at the age of nine and has worked with the Queensland, Adelaide and Tasmanian Symphony Orchestras as well as Opera Australia.

Now living in Melbourne, Sarah Henderson has played trumpet with a number of orchestras throughout New Zealand and was selected to play the Last Post at the 2014 ANZAC Commemorations in Gallipoli, Turkey.

Music through singing, dancing or story telling is not only fun but an exciting way to increase children’s awareness of sounds, movement and language. Music enhances children’s memories, assists speech development and extends their vocabulary.