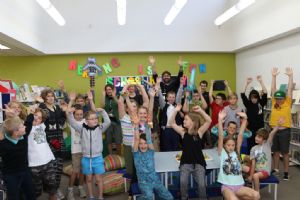 The Bega Valley Shire’s first Minecraft Camp has left fans of the game thirsty for more.

Bega Library was headquarters for the event on Sunday with 35 young people from across the region turning out.

Minecraft is a video game that focusses on strategy, creativity and out of the box thinking where the player can build their own worlds, houses and cities block by block, and being a game there’s a few “creepers” thrown in for good measure.

Library Programs and Partnerships Officer, Scott Baker, said the kids are crazy for it because the only limitation is their own creativity.

Demand for the camp was overwhelming with tickets selling out in 3 days.

“The Camp is an extension of Regional Innovation Week in the Bega Valley and links with Into IT Sapphire Coast,” Mr Baker said.

“The key partnership has been with Bega Valley Shire Council IT Department and IT Trainee David Perry, who helped set up the library for the Camp including configuring three servers for participants to connect to and play,”

“David is a Minecraft wiz and has been very gracious in sharing his knowledge through a Minecraft Masterclass,” he said.

Prizes were given out on the day for Best and Fairest, Best Creation and Hardcore Survivor.

Some of the stand out creations included a massive SpongeBob Squarepants, a sheep shaped mansion and a full village complete with jumping castle.

“It is great that the Library can facilitate such an event for the youth of the region and that the whole of Council is behind it,” Mr Baker said

“Everyone left asking when the next one would be!”