Youngsters learn about the Law

Youngsters learn about the Law 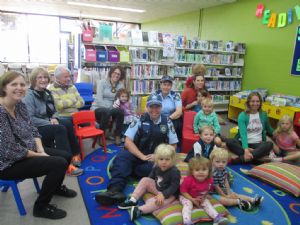 Both officers read books to the pre-schoolers, including “Pig the Fibber” by Aaron Blabey and “Tell the Truth” by Kate Tym.

Information officer, Anne Moore said the children were a little wary at first but “warmed” to the officers who were in full uniform.

“There was lots of colouring and even stickers to keep as mementos of the visit,” she said.

“The children were all encouraged to say hello or wave to the officers if they see them when they are out and about.”

Photograph: Some parents and grandparents were on hand when Officer Karen Nelligan and Sarah Bancroft read to pre-schoolers in the Bega Library on Thursday. The children are Billie Finnegan, Cormac Ryan, Judd Mackey, Arlo, Riley, Isla Sweeny and Juniper.