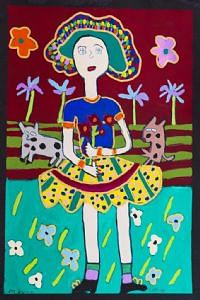 The lively paintings of a local and fast rising star in Australian art are delighting visitors to the Bermagui library.

This week the doors opened to a summer exhibition of Miriam Kydd’s vibrant artworks, with an official opening and morning tea planned for 10:30am on Friday 9 December.

“The exhibition consists of ten portrait paintings which reflect the artist’s exotic imaginary world of amazing and colourful characters,” he said.

“Even though Miriam Kydd only first picked up a paint brush six years ago, she has gone on to be a well-known talent through guidance and support offered by the Tulgeen Disability Services’ Art in the Garage project.

“This is the second year Bermagui library has exhibited artworks from the project, which was started in 2001 as part of Tulgeen’s Training and Education program, using a converted garage as an art studio.

Art in the Garage provides an environment in which emerging artists are supported one-on-one to develop individual forms of self-expression and visual language.

The studio environment fosters experimentation and exploration of media through the unique and uninhibited perspective of people with disabilities.