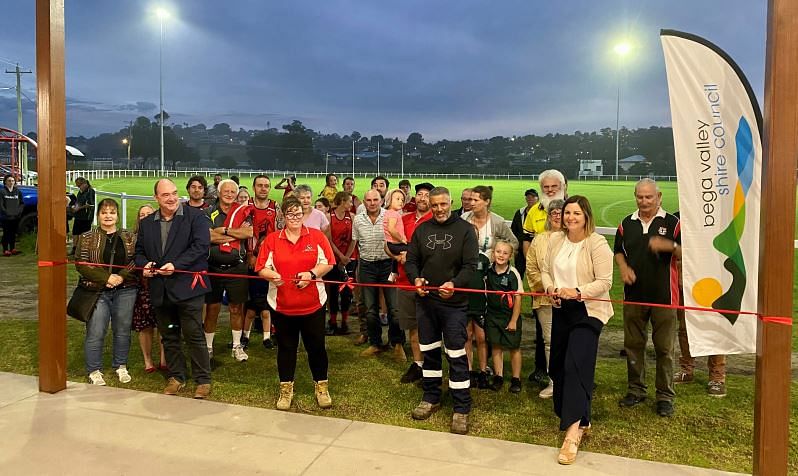 Cr Fitzpatrick was joined at the official opening by representatives from the NSW and Australian governments, local sports clubs, donors and supporters, builders and supplier groups.

“The Barclay Street Pavilion is a great example of what can be achieved by a dedicated group of stakeholders, with strong cross-community support,” Cr Fitzpatrick said.

“This great facility has been made possible with funding from the NSW Government’s Stronger Country Communities Fund, the Australian Government’s Local Roads and Community Infrastructure Program, Council, and support from the Business Council of Australia, Wentworthville Leagues Club’s Unite and Raise fund and the Foundation for Rural and Regional Renewal’s News Corp Bushfire Fund.

Situated in the north-east corner of the precinct, the pavilion includes change rooms, a kiosk and kitchen, public toilets, storage facilities and all abilities access. It will service the local cricket, soccer, Australian rules, netball and tennis clubs and importantly, be a facility available for a range of community uses and events.

“The Stronger Country Communities Fund is already making a real difference to regional communities, with work on more than 2,000 projects already underway in every local government area across the state,” Mr Toole said.

“The NSW Government is investing record amounts to deliver the infrastructure needed to stimulate regional economies and we’re also backing grassroots projects that make a positive difference to everyday life.”

“It’s great to see the new pavilion come to fruition for the benefit of Eden and surrounding communities. I’m sure it will receive a wide range of use from sporting clubs and community groups,” Ms McBain said.

“I have been part of this project since my time as Mayor and have continued to champion it, so it’s absolutely wonderful it can now be used by the community.”

Mayor Fitzpatrick said a lot of hard work and goodwill had been given by the user groups and Council appreciated the efforts of all involved in delivering a great outcome.

The new pavilion is a key element in the realisation of the Barclay Street sportsground master plan, which includes improvements to the soccer clubhouse and facilities, a major upgrade to the skatepark, the construction of a new all-inclusive playspace, improved driveway entrance and carparking, the establishment of a set down area for the Cruise Ship shuttle bus service, a memorial garden and a network of pathways to link these recreational elements together.