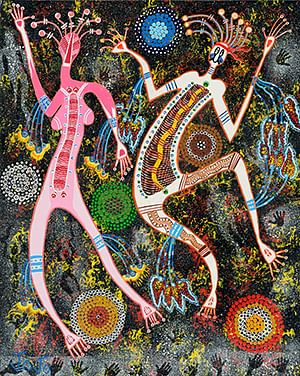 An inspired work, created to assist children to get to sleep, has been announced as the inaugural winner of the $500 Bega Valley Mural Prize.

Joe McKenzie’s ‘Spirit Dance’ beat off a strong field and will now be reproduced on a large scale and presented as a public mural on the Bermagui water tower before the end of the year.

The installation will take place in conjunction with the Wallaga Lake community and Merrimans Land Council.

Strikingly colourful ‘Spirit Dance’ was originally painted in an attempt to help Mr McKenzie’s young sons Latrell and Kobe to get to sleep, with its friendly protective spirits to ward off bad spirits.

“As a participant in an indigenous mentorship program, Joe met Uncle Danny Eastwood (a prominent painter and cartoonist), who taught him a great deal about traditional techniques as well as the use of symbols in Australian Indigenous art,” Mr Dawson said.

“There is absolutely no doubting the talent Joe has and we are very much looking forward to ‘Spirit Dance’ taking its prominent position in Bermagui.

“We see the mural prize as a new and exciting way to support and promote local artists. Public art has been growing in popularity and the response we’ve had to the existing murals in Eden and Merimbula has been fantastic.

“We really appreciate how supportive of our partners, the BVSC Water and Sewer team, have been in enabling us to turn our water tanks into canvasses for our local artists and we continue to work together to identify further opportunities across the Shire,” Mr Dawson said.