The following image shows the location of the Brogo-Bermagui water supply system. The image shows the three sources from which water can be extracted, the major water storages (Brogo dam and Tilba dam) and the main components of the reticulation system including reservoirs, chlorinators and pipelines. 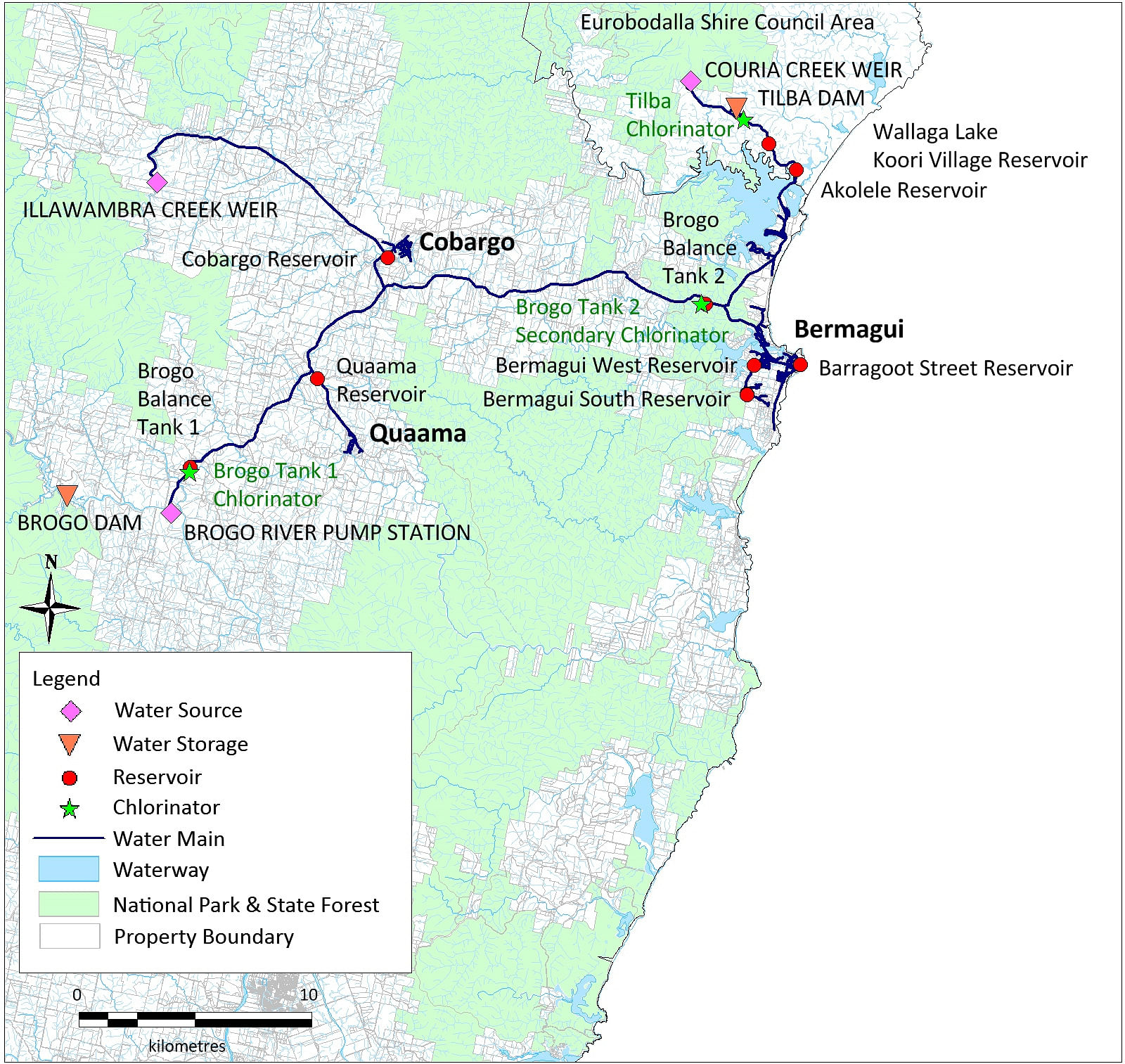 Brogo River is the main source of water for the Brogo-Bermagui water supply system and has supplied all of the water to the system since 2009.

Couria Creek (Weir) was the original source water supply for the town of Bermagui. More recently, the water from Courier Creek was used to supply small village areas north of Bermagui, however no water has been extracted from this source since 2009. Illawambra Creek can supply Cobargo and some rural properties, but this source has not been used since 2003. 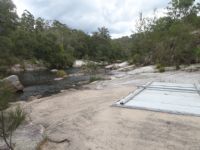 Tilba dam (capacity of 90 mega litres) is a small off-stream dam filled with water from Couria Creek. It was built in the late 1960’s at a time when Couria Creek was the only reticulated water supply for Bermagui. Its purpose was to store water for supply during drought and high peak water use times when water available from the Couria Creek source was insufficient.  Since the addition of the Brogo River water source in the mid 1980’s, water stored in Tilba Dam has rarely been used.

Whilst not a dedicated storage for the Brogo-Bermagui water supply system, Brogo Dam, located approximately four kilometres upstream of the Brogo River intake, provides an important storage of water for the system, particularly during drought.

Brogo Dam is operated by Water NSW. It is a 9000 megalitre (ML) capacity on-stream dam with a 400 km2 catchment area. Water NSW control the release of water from the dam for downstream extraction and use.  The majority of water released from Brogo Dam is for irrigation of farmland downstream. At the beginning of each “water year” (July-June), Water NSW assesses the available water in the dam for allocation. This includes the volume in the dam as of July 1st, less dead storage, plus the “assured” minimum inflow during the next 12 months (based on what was received during the worst drought on record).  An allowance is also made for evaporation from the dam and downstream system losses. From the available volume, water is then allocated firstly to town water supply (700 ML), stock and domestic and other high security licence holders (300 ML), riparian rights and the environment. The remaining water is then allocated to all general security licences (irrigation licences) and is expressed as a percentage of the total entitlement. In a normal year with a full dam, general security licence holders will receive about 40% of their allocation at the start of the year. If the dam receives good inflow during the year this is revised upwards. It cannot be revised downwards during the water year. Water NSW then manage releases to deliver water to all customers (licence holders, basic rights and the environment) and minimise losses (flow to the estuary) throughout the water year.

If the year is dry, with low inflow into Brogo Dam, the water level in the dam can fall quickly because large volumes of water are released (eg. >70 ML/d) to satisfy requests from general security licence holders downstream. When a general security licence holder has used their announced allocation for the year, they can no longer request water from the dam. Progressively less entitlement downstream is left and much less water is released from the dam (eg. 3 ML/d). The volume of water left in the dam when the majority of general security entitlements have been met for the year varies, but can be as low as 10% of storage capacity if the year is dry. The time of year that this can occur can also vary. With less water released for irrigation, the water level in the dam falls more slowly, or is steady, depending on inflow.

Water from Couria Creek supplies areas north of Wallaga Lake and can flow by gravity to Bermagui if available and needed. It also flows into (and out of) Tilba dam. Illawambra Creek can supply Cobargo by gravity, although the impact of the Wandella Water Sharing Plan and recent droughts has meant it is easier operationally and more reliable to supply Cobargo from the Brogo River source.

The system at a glance