Dick Smith is our Ambassador

Dick Smith is our Ambassador 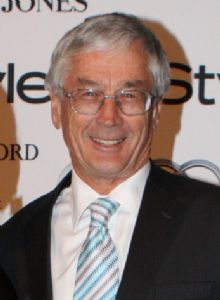 He was the founder of Dick Smith Electronics, Dick Smith Foods and Australian Geographic, and was selected as the 1986 Australian of the Year.

In 2010 he founded the media production company Smith and Nasht with the intention of producing films about global issues.

In 2015 he was awarded the Companion of the Order of Australia and is a fellow of the Committee for Skeptical Inquiry.

In 1968, Mr Smith founded electronics retailer Dick Smith Electronics as a small car radio installation business in Neutral Bay and sold the business to Woolworths in 1987.

In 1999 he founded Dick Smith Foods marketed as a crusade against foreign ownership of Australian food producers, particularly Arnott's Biscuits, which in 1997 became a wholly owned subsidiary of the Campbell Soup Company.

He learned to fly a plane in 1972, graduating soon after to a twin engine Beech Baron.

At the age of 34 he bought his first helicopter with which he made a record-setting flight from Sydney to Lord Howe Island and return, 1,185 km.

In 1978 he found the wreck of the Kookaburra aircraft, which crash-landed in the Central Australian Desert in 1929.

In 1983 Mr Smith published the book "The Earth Beneath Me" which described his solo helicopter flight around the world, starting in Fort Worth, Texas, taking in Balmoral Castle, London, and he arrived in Sydney, Australia 23,092km later.

His journey ended on 22 July 1983, the 50th anniversary of Wiley Post's solo aeroplane flight around the world in 1933.

Two documentaries were also filmed during the flight and a third one soon after.

Mr Smith's first attempt to fly his helicopter to the North Pole, in 1986, failed when he had to give up just 670 kilometres short of his destination because his navigation equipment was beginning to fail and visibility had dropped to almost zero.

He made two more attempts to reach the North Pole and the third attempt, in April 1987, was successful. The flight required refuelling in parts of the Arctic Circle where fuel was not available, so Mr Smith arranged for the fuel to be delivered in a DHC-6 Twin Otter plane.

In October 1991 Mr Smith was the second person to fly over Mount Everest.

The following year he and his wife, Pip, circled the summit of Mount Everest and took photographs.

In the magazine he wrote of his flight over Everest, saying “The experience was unbelievable and I felt privileged to be one of the very few people to obtain permission from the Nepalese government to fly over the summit.”

In 1992 Mr Smith made another helicopter flight around the world, this time with Pip. At their journey's end they had flown more than 39,607 nautical miles (73,352 kilometres) and had taken more than 10,700 photographs, creating a valuable record of what the Earth looked like in the last decade of the 20th century.

Mr Smith has also attempted a number of well-publicised practical jokes, including the "attempt" to tow an iceberg from Antarctica to Australia to obtain more fresh water in 1978.

In the early 1980s he served as the conductor aboard a London double decker bus which jumped 15 motorcycles.

The bus, driven by Hans Tholstrup, was a humorous poke at Evel Knievel who had visited Australia in 1979 and jumped his motorcycle over buses.

Dick Smith was appointed an Officer of the Order of Australia in the Australia Day Honours of 1999, for his services to the community, charity and business.

In 2015 he was advanced to a Companion of the Order of Australia "for eminent service to the community as a benefactor of a range of not-for-profit and conservation organisations, through support for major fundraising initiatives for humanitarian and social welfare programs, to medical research and the visual arts, and to aviation”.

Mr Smith was awarded the Baden-Powell Award in 1966, the highest award in the Rover Section, after 14 years in the Scouting movement.

He was awarded Australian of the Year in 1986 and named an Australian Living Treasure in 1997.

In 1992 Mr Smith received the United States' Lindbergh award which goes to individuals whose work over many years has made significant contributions toward the Lindbergh's concept of balancing technology and nature.

In 2000, he was named the 2000 Adventurer of the Year by the Australian Geographic Society after he made a trans-Tasman balloon trip from New Zealand to Australia.

In December 2011, Mr Smith was appointed as a Consulting Professor in the Department of Biology, School of Humanities and Sciences of Stanford University California in recognition of his many years of work on environmental issues including his 2011 book, Dick Smith's Population Crisis.

In 2005, he gave public support to the asylum seeker Peter Qasim who was released later that year by the Australian Government after seven years in detention.

He also paid a large share of the ransom to free Australian photojournalist Nigel Brennan and Canadian journalist Amanda Lindhout who were both being held hostage in Somalia.

Mr Smith donated $60,000 in February 2007 towards a campaign to secure a fair trial for then Australian terrorism suspect David Hicks who had been held in Cuba's Guantanamo Bay for five years and financially assisted Australian Greens leader Bob Brown after he was left with a $240,000 anti-logging court bill after losing a case he brought against Forestry Tasmania.

Failure to pay would have resulted in Dr Brown having to declare bankruptcy and therefore lose his seat in the Senate.

In 2011 Dick Smith expressed support for action on climate change, including the introduction of a carbon tax. He produced a documentary ‘Ten Bucks a Litre’ calling for the development of electric cars, concerned at rising fuel prices.

In August 2010 Mr Smith announced he would be devoting himself to questions of global population, overpopulation, and alternatives to an endless economic growth economy.

In August 2010 he announced the Wilberforce Award of $1 million to a person under 69 who attracted his attention by advocating alternatives to population and consumption growth.

In May 2011, he published his book on the subject, ‘Dick Smith's Population Crisis: The dangers of unsustainable growth for Australia’.

In March 2015, Mr Smith registered the Dick Smith Party, but said he would not be running as a candidate himself.

The party will focus on the senate and run on a platform of curbing unnecessary regulation and population growth.