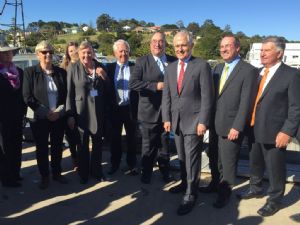 Council's General Manager, Leanne Barnes said the visit came with more than $34 million in funding promises for the Eden Port development and the future proofing of the Merimbula Regional Airport.

"Today marks a very welcome investment in the growth of the Bega Valley Shire," she said.

"It is recognition of the potential for tourism development as outlined in Council's Masterplans for the Eden Port and Merimbula airport precincts.

"Council's vision for economic development in these key tourism gateways has led to previous funding packages including $10 million of Federal funding, and a $3 million State Government package for the extension of the Eden breakwater wharf.

"Today's announcement of an extra $34.6 million for continued improvements to the wharf in Eden, and the building of much needed infrastructure at the Merimbula Regional Airport is a great result for the community. 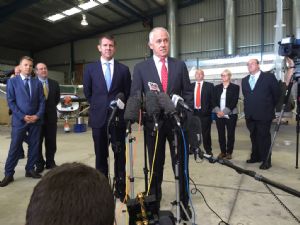 "The $29 million Eden Port funding from the State Government will extend the breakwater wharf even further to accommodate cruise ships in excess of 300 metres. It is a significant commitment and demonstration of confidence in Eden and this region into the future.

"This means the total project cost of the wharf extension, at $44 million, is now fully funded and the project and cruise opportunities will continue to go from strength-to-strength.

"The Merimbula airport funding will add to nearly a million dollars secured last year through the Restart NSW Regional Tourism (Airports) fund which went towards fire support infrastructure at the Merimbula Regional Airport.

"That was stage one of the fund and today's announcement of an extra $4.4m of State funding will allow council to extend the runway north, seal the runway end safety area, and undertake other aircraft service areas which will assist air freight services.

"On top of this, it is welcome news to hear of an extra $1.2 million dollars of Federal Government funding that will improve passenger and baggage security and freight handling, and contribute towards the sealing of the car park on the east side of Arthur Kaine Drive.

"These combined funding packages are excellent news for every town and village in the Shire as developing tourism gateways to grow with increasing demand from different domestic and overseas markets will result in the benefits filtering through to the whole community.

"We thank the Honourable Peter Hendy MP and the Honourable Andrew Constance MP for their commitment to expanding our local tourism industry, as well as Councillors and the many Council staff and community members whose input has played a large part in securing these funds," Ms Barnes said.