Exhibition 2x1 at the BVRG

Exhibition 2x1 at the BVRG 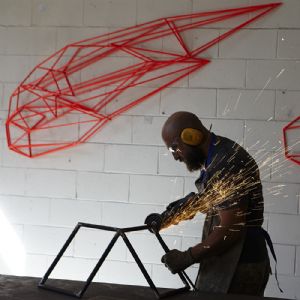 An exciting new exhibition will open next week at the Bega Valley Regional Gallery, featuring works from Sydney based sculptor, Dion Horstmans.

The exhibition, 2x1, presents a time capsule of works that have evolved over Horstmans 19 years as a sculptor.

BVRG Curator, Iain Dawson, said Horstmans started working with metal in the props department of the Matrix film trilogy when it was being shot in Sydney in the early 2000’s.

“Since then he has expanded his practice to include exhibitions in his native New Zealand as well as sell out shows in Sydney and Melbourne,” he said.

“Most recently Horstmans has completed several major public art commissions in both capitals, the latter being a major structural piece in a new Collins Street skyscraper.

“After his Bega exhibition the artist is heading to China to finalise talks with an Australian architecture firm who will be bringing a bridge of his design to life in Shenzen,” Mr Dawson said.

The exhibition will be opened on Friday 28 August by Lisa Havilah, director of Sydney's newest and most exciting multidisciplinary arts precinct Carriageworks, and will run until 3 October.

All members of the community are encouraged and welcome to attend the exhibition opening from 6pm.

Photograph: Dion Horstmans in his studio; photograph by Jay Harrison.