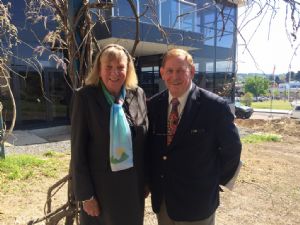 Cr Michael Britten has been re-elected unopposed as mayor of the Bega Valley Shire for 2015-16.

At an extraordinary meeting of Council today (Wednesday) Cr Britten was nominated for mayor by Crs McBain and Tapscott.

Two Councillors, Liz Seckold and Ann Mawhinney, nominated for the role of Deputy Mayor and Cr Seckold was re-elected by seven votes to two.

In his address to the meeting Cr Britten said his year had started with a lot of work, trying to grow the flow of information to Councillors so that they would be better informed.

That had been effective and Councillors were now better equipped to able to handle the complexities of a new Local Government Act.

He listed the Port of Eden, Action on Imlay, the Hotel Australasia, the airport, Merimbula roundabout and the Palmer Street bypass, the learning centre and the Tura library as projects achieved or underway in the southern part of the Shire and the Bega Civic Centre, redesign of Littleton gardens and the new carpark, and the Dickinson Pavilion in Bermagui in the north.

On an administrative level, there had been an operational review of staff, the appointment of four place-based officers, collaboration with neighbouring Councils and preparation for entering into a Memorandum of Understanding with Eurobodalla Shire Council regarding a joint regional organisation under new regulations to be in place by December.

Cr Britten said he was confident that after the IPART review, Bega Valley Shire Council would remain a stand-alone council.

He spoke about the successful regional tourism forum held last year, and a leadership forum and a business forum are scheduled in the next 12 months.

He thanked the staff and the Councillors for their support and for sharing the load of public duty, particularly Deputy Mayor Cr Seckold.