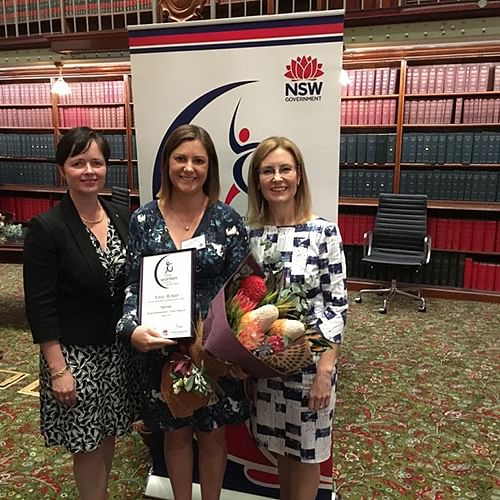 The Bega Valley Shire Mayor, Kristy McBain has been recognised as a role model in Council and the community by winning a category in the 2017 Ministers' Awards for Women in Local Government.

Nominated for her dedication to responsible leadership and community advocacy, Cr McBain said she is honoured to win the award.

“When I put my name forward as a candidate in the 2012 Council elections it was to serve the community and to build best possible future for the Shire by thinking sensibly and creatively,” she said.

“I’m proud to be part of a team of elected individuals who each have this same goal, and to win this award is both an honour and recognition that we are in exciting times, moving towards strong growth in the region.”

Ms Barnes said Cr McBain has been recognised for her commitment and tireless energy.

“This is a woman who manages a successful business, works as a lawyer, is a mum to three young children and is a well-respected civic leader who gets the job done.

“Cr McBain is a dedicated contributor to all issues and matters before Council. She is particularly passionate about issues relating to economic and business growth, education, planning and development, real community engagement and thinking outside the square when planning for the future.

“Right from the start, Cr McBain has demonstrated that being a Councillor is first and foremost about being an active member of the local community. She serves as Councillor and Mayor from within the community, showing that we all play a role in making the Shire the best it can possibly be.

“This is a well-deserved award, and I congratulate Cr McBain on this recognition of hard work and commitment,” Ms Barnes said.

The Ministers’ Awards for Women in Local Government were established to recognise the outstanding contributions and achievements of women in local government in NSW. The awards are delivered in partnership with the Minister for Women, the Hon. Tanya Davies MP.