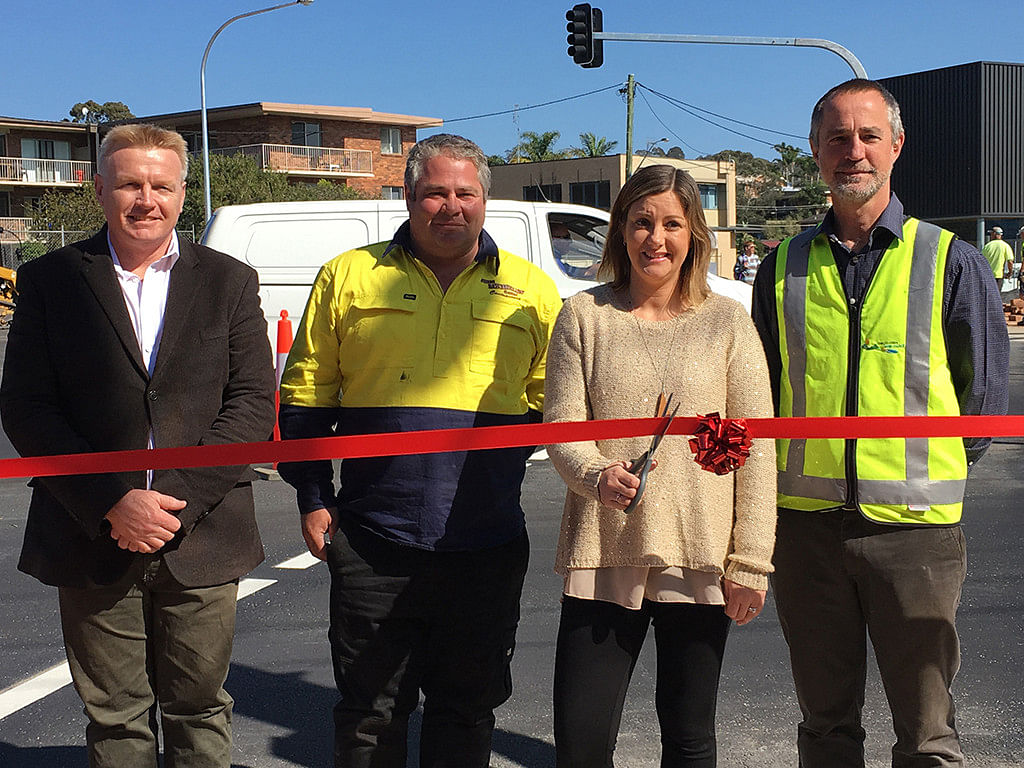 The Merimbula CBD Bypass is open.

The official opening of the highly anticipated, $7.5 million project comes two weeks ahead of schedule and critically it is operational ahead of the traditionally busy long weekend period.

While there remains some work to do on landscaping around the intersection, the roadworks are now complete, with Roads and Maritime Services representatives to remain on-site this week to fine-tune new traffic light phasings.

The bypass project took its eventual form after detailed traffic studies and modelling were undertaken in 2009 and Council adopted the option to realign and upgrade Park Street to provide a traffic route linking the Market/Monaro Street intersection with the Merimbula Drive/Reid St/Sapphire Coast Drive intersection.

The overarching objective of the project is to reduce congestion within the Merimbula CBD by better facilitating through traffic movement along the bypass alignment and away from the often challenging Market/Main Street, Market/Beach Street and Hylands Corner intersections in particular.

Speaking at the official opening, Mr Buckley reserved strong praise for the work undertaken by local civil contractor, John Michelin & Son Pty Ltd and paid tribute to the surrounding business owners for their patience and understanding while the intersection works were completed.

“Our principle contractor, John Michelin & Son Pty Ltd of Eden, has done an excellent job in integrating the various components of the intersection works, such as the traffic lights, electrical changeover and Telstra works and delivered an outstanding product two weeks ahead of schedule and on budget,” Mr Buckley said.

“I’d also like to thank the business community here within Merimbula, particularly the shops that have been very heavily impacted by the works. We apologise for the considerable disruption to them and thank them for their understanding.

“One business owner described it as short term pain for long term gain and we are very confident that will prove to be the case,” Mr Buckley said.

In its entirety, the bypass runs from the roundabout on Merimbula Drive, into Park Street, taking in a re-aligned Palmer Lane and Monaro Street intersection before reaching the new traffic lights at Monaro and Market Streets. Four pedestrian crossings with red arrows signals incorporated in the traffic lights to allow time for pedestrians to safely cross the intersection.

Drivers are urged to proceed with caution around the new intersection, with those approaching from the south needing to be aware of the need to turn right into Market Street, as the intersection prioritises traffic movement along the bypass alignment.