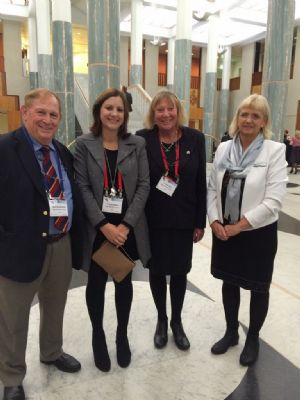 Bega Valley Shire Council has succeeded in having all five motions it submitted to the Australian Local Government Association adopted at its annual assembly.

Acting Mayor Liz Seckold said Council’s motions had covered issues ranging from calling on State and Federal Government to have local government recognised as an instrument of Government to the need for a co-ordinated approach at all levels of government for the provision of affordable housing for the most disadvantaged in the community.

“We were also successful in gaining support for the funding of reputable organisations to address youth mental health and suicide issues that have been of concern to Council for several years,” Cr Seckold said.

“Support for young people suffering mental health problems needs to be accessible, appropriate and available at a local level.

“The leading cause of death among 15 to 24 year olds is suicide and identifying risk factors and warning signs like depression, self-harm and substance abuse is critical.”

Cr Seckold said Council’s experience with disastrous floods in both 2010 and 2011 had prompted a motion calling for a review and increase in the National Disaster Relief and Recovery Arrangements to accommodate the requirements of councils in rural and remote areas.

“We lost four timber bridges in those floods and, as a Council with a small rate base, we cannot address damage on such a scale without financial support,” she said.

Another motion was to call on the Federal Government to support the development of renewable energy projects by local government.

“The 30 kw solar farm is an initiative of climate action group, Clean Energy for Eternity, which through an agreement with our Council is now supplying about half of the power needs of the sewerage plant.

“We felt that such initiatives need to be encouraged and grants for feasibility studies to local councils would make a big difference,” Cr Seckold said.

“Our motions to the assembly covered a broad range of issues and we are very pleased that every motion was proposed and carried.

“That is very satisfying to us as it acknowledges a range of positions that resound with other Councils around the country,” she said.

To view the resolutions in full go to http://alga.asn.au/site/misc/alga/downloads/events/2015NGA/NGA_resolutions.pdf